Guy Bevan : A short montage thingy about my new (read: old) car I recently purchased. It needs some work (which is partly the reason I bought it) but mechanically it's sound.

About the Rover P4

The Rover P4 was introduced at the September 1949 Earls Court Motor Show as the Rover 75. It was a radical departure for Rover with its up to date styling (influenced by the Studebaker Champion Regal Deluxe), a painted grille instead of a chrome grille and central “Cyclops” pass light. The car was fitted with a 2103cc 75 bhp 6 cylinder engine, 4 speed gearbox and freewheel.

For the 1951 model year the rectangular instruments were replaced by round instruments to achieve wider appeal. For the 1952 model year a chrome grille, without the central pass light was introduced. The chrome grille remained a feature of the P4 range throughout its remaining life, albeit mildly modified over time.

The 1954 model year saw the introduction of the Rover 90 with a 2638cc 6 cylinder engine and the Rover 60 with a 1997cc 4 cylinder engine. All models received a floor mounted gear lever to replace the column change fitted to the earlier cars. Additionally, the handbrake lever was relocated to the side of the driver’s seat from its original position under the dashboard. The 1955 model year saw the return of the shepherd’s crook handbrake lever under the dashboard along with major changes to the rear end of the car which were designed by David Bache. The rear wing/boot height was raised and a wrap around rear window introduced.

For the 1956 model year the 90 model was available with overdrive as an option. The 1957 model year cars benefited from a new style front wing along with the introduction of the twin carburetted 105S and automatic 105R variants to replace the 90 as the top of the range models. A new style of two-tone paintwork became available as an option for the 1958 model year with the join of the two colours positioned at the waist height. Towards the end of the 1958 model year the 105R model was dropped due to poor sales and the 105S was renamed the 105.

The 1961 and 1962 model years introduced very few changes to the 80 and 100 models and are mainly confined to the available colour schemes and aspects of trim, e.g. reclining front seats.

The introduction of a new Rover car is always an event of considerable interest, perhaps because it occurs less frequently than in most other manufacturers. The recent announcement of the new Rover 2000 has even greater significance than ever because not only is the car entirely new, having no parts common to other Rover Models, but it spearheads Rover’s re-entry into the lighter car field, and a new factory has been built and equipped specially to produce it.

Possibly the most advanced feature of this car is the method of body construction. The body panels of the Rover 2000 are assembled around a base unit on to which all the chassis components, electrical equipment and ancillaries are first mounted. At this stage the vehicle is in skeleton form but mechanically complete. It is driven and tested. The individual panels, doors and roof are then attached to the structure as separate items.

All base units and body panels are carefully aligned and then jig drilled, allowing no possible variation in the location of attachment points. Consequently replacement of any panel damaged through accident is quick precise and perfectly straightforward.

The base unit construction of the Rover 2000 combines light weight and great strength. The box section steel bulkhead between the engine and passenger compartments is particularly robust and it is this rigid section that takes through coil springs, the stresses and reactions of the independent front suspension units.

A short remote control gear lever fits the hand naturally and encourages full use of the car’s four speed, all synchromesh gearbox.Power for the new Rover 2000 comes from an entirely new four cylinder engine of simple, robust, single overhead camshaft layout. An excellent power output of 90 bhp. (installed) is developed at 5,000 rpm. and this is combined with extreme economy of operation. At a steady 50 m.p.h. the Rover 2000 returns figures of 36 miles per gallon. The overhead camshaft design also gives the engine a wide range of speeds up to a maximum of 6,000 rpm. Cruising in the upper nineties is easily obtained.The front suspension is independent with the coil springs mounted horizontally. All the ball joints are sealed against entry of dust and water.

Rear suspension is of the de Dion type sliding tube, specially developed by Rover engineers for the 2000. It shares with the beam axle the advantage that the rear wheels always remain parallel, but not the disadvantage of excessive unsprung weight. It also possesses the smooth and stable ride of independent rear suspension without the disadvantage of wheel misalignment and consequent heavy tyre scrub.

To give effective stopping power, Dunlop disc brakes are fitted front and rear, mounted inboard at the rear. Servo assistance is provided for easy pedal operation.

The 2000 has been designed to run on radial-ply tyres with belted construction. They give higher cornering power, good speed capacity at one pressure setting and increased mileage.

In planning the driving compartment of the 2000, Rover designers have combined the practical with the aesthetic. The facia is finished in African Walnut grain and instruments are grouped in a single rectangular panel, clearly visible through the two-spoke steering wheel. All switches are placed in a row on the facia rail. They are recognisable by symbol, name, shape and movement. A wide, readily accessible shelf is suitable for gloves, lady’s handbag or any other item that requires a convenient resting place. Controls for the highly efficient heating system are centrally located and easily operated. Extra fresh air vents are set into the rail in front of the driver and passenger with an adjustable flap to direct cool air to any desired level and a control to regulate the quantity of air entering the car.

The Rover 2000 offers a high degree of comfort. At the rear, passengers sit in two well-formed individual seats designed specifically to ensure exceptional comfort and lateral support for fast touring. Side arm-rests on the doors and a folding centre arm-rest complete the easy-chair effect. When the centre arm-rest is folded up a padded portion between the seats affords accommodation for an occasional third person.

Front seats are also particularly designed for high-speed comfort and effective lateral support during the rapid cornering of which the car is capable. There is ample fore and aft adjustment for drivers of every stature, while the back-rests can be adjusted to and locked in any position from the vertical to the fully reclining.The steering wheel may be adjusted for rake to enable the driver to adopt the position that suits him best. The practical boot has a capacity of 161/4 cubic feet which gives room for a great many pieces of luggage.

The spare wheel is normally mounted vertically on the left-hand side, but may also be stowed flat on the floor. In this position there is room for four full sets of golf clubs and trolleys inside the boot. A further alternative provides for the mounting of the wheel on the outside of the boot lid ( an optional extra fitting), then the whole compartment is available for carrying a vast amount of luggage.

All this adds up to the fact that the elegant new ROVER 2000 is one of the safest and most interesting cars to be introduced for many years.

The Rover P6 Club wish to extend thanks to The Rover Group, MG Rover and B.M.I.H.T. for permission to use the text and photographs/pictures in this article which originally appeared in the October 1963 edition of Rover News, produced and published by the Publicity Department of The Rover Company Ltd. 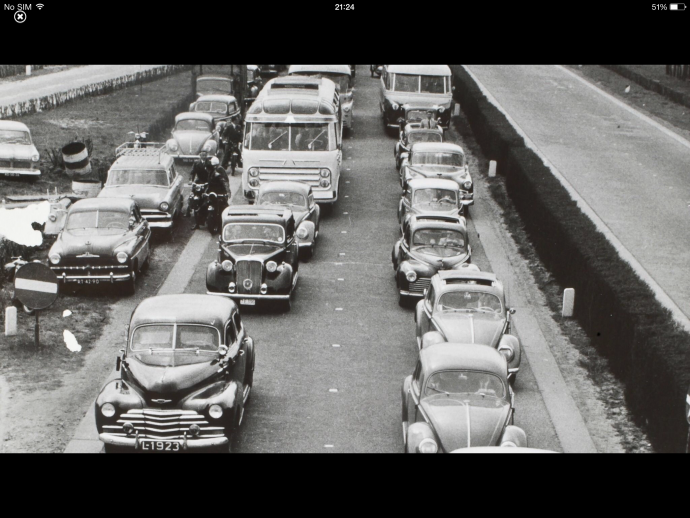